I thought maybe I should start from the beginning, so on this post I’m gonna give some background for the making of “The Splitting: Chapter 1”, and write about what brought me to some of the ideas in the game.

So, I have been trying to make a game on my own for a few years now, ever since I finished my game design studies. I started out with some big ideas for big games, which never made it through the early stages of development, and it took time to both polish my skills and overcome my tendency to over-scope.

About a year and a half ago I started working on a small point and click adventure game, which was given the temp name “Sewer Fairies”. I actually had pretty high hopes for this one, but it had two major problems –

1) It had an outrageous amount of graphics to it, and barely any story. halfway into the development I lost motivation, because I had so much graphics to create, but not enough story to make me feel connected to the game. I’m not saying that everyone needs a story in their game, but it’s definitely something I need to keep me going.

2) Because it was the first chapter of the game, I took an approach of “saving the best for last” – I had some great ideas for the next chapters, but thought they were too “crazy”, and that in the first chapter I should be easing the players into things. But what actually happened was that the first chapter became kind of dull, and didn’t have any of the cool stuff that was supposed to make the game special. 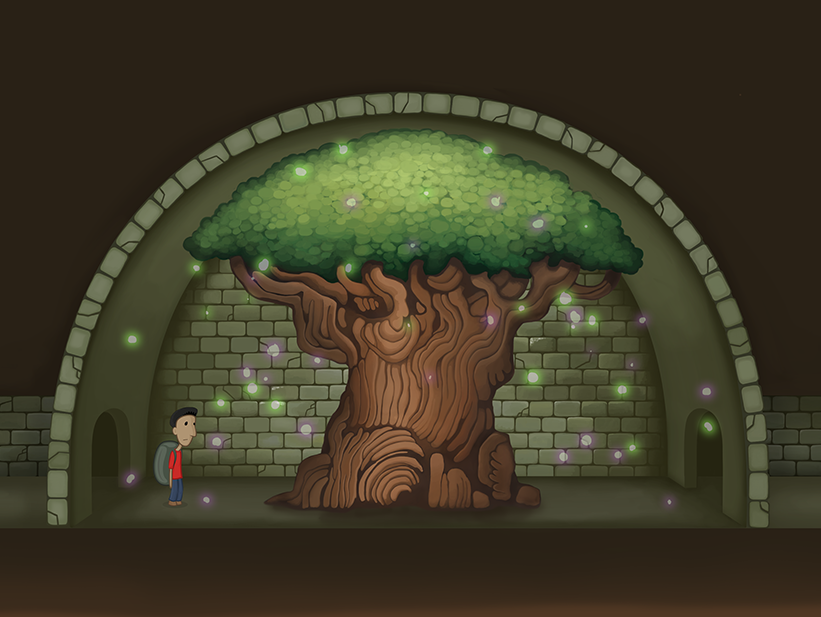 So… before starting my work on “The Splitting”, I have already decided I should keep the graphics to a minimum, and focus mainly on the plot and riddles. This decision helped a lot, because it let me spend more time on the part that I love most about making games – creating worlds and stories. It also helped me decide on the graphic style, a simple pixel art style, instead of the time consuming hand painted style I used for “Sewer Fairies”. The second problem of “Sewer Fairies” was going to hit the first chapter of “The Splitting” as well, but that will happen much later.

the first inspiration source for “The Splitting” has actually been running around in my head for more than a decade – ever since I played “Zork: Grand Inquisitor”, a first person point & click adventure from 1997. At some point in the game you enter your sidekick’s bedroom, and find out you are able to pass through the mirror into a “secret mirror room”, which involves a cool riddle where you have to connect two scroll parts, one of which is reversed. I remember loving the idea, and being sorry that the game did not develop it any further. Also, while playing, I have noticed that when you approach the mirror you don’t see your reflection in it. This fact is kinda taken for granted, maybe because an invisible player character is a consistent theme throughout the game – you never actually see yourself, and even your hands are invisible when lifting objects. But I still remember wondering – if you did have a reflection, would you still be able to pass through the mirror?

About 3 years ago, I submitted a short fantasy story to a short stories contest. The theme was “reflections”. My story was about a man on his first few weeks in prison, who discovers that his cell mate sometimes disappears at night. One night, when his cell mate is gone, he looks through his stuff and finds a big mirror, hidden under the mattress. He tries to enter the mirror himself, but can’t figure out how to do so, so he waits for his cell mate to return and then threatens to break the mirror unless he tells him his secret. The cell mate then reveals to him that you can’t pass through the mirror unless you get rid of your reflection, since your reflection is what physically stops you from passing. The story didn’t win the contest, but it was a beginning for the game’s idea, and also an inspiration for Mitchell and llehctiM’s story.

One more important topic in the game is the one of parallel worlds. Now, when I try to remember where I first became interested in it, I discover that it was also while playing “Zork: Grand Inquisitor”! It seems I owe this game a lot more then I thought, and only realising it now…

In Zork, we come across the ruins of a once prospering magic university. All that’s left of it now is an old fountain. Near this fountain we discover a portal to a parallel dimension – “The ethereal plains of Atri”, where the university still exits in all its glory. The fountain, being the only thing in common between these two dimensions (though affected by the ravages of time in the real one), is in my opinion very meaningful. It functions as a link, and it’s no coincidence that the portal is placed right next to it.

What I really liked about this part of the game is the feeling you get when standing next to the fountain – You feel the existence of both dimensions at once. When you walk away, they grow further apart. In “The Splitting”, this is the exact same role of the mirrors, but here they function both as the portal and as the link between the worlds. A room with a mirror in it will look exactly the same as the “real” room, but a room with no mirrors will immediately start dissolving, going back to the chaotic nature of the mirror world. This will be even more obvious in the next chapters, when Daniel and llehctiM are travelling deeper and deeper into the “shadows” and away from the mirrors.

Another version of this idea exits in the “Chronicles Of Amber” series, where Amber and the chaos are the only real worlds, and all that lies between them is just various reflections of the two. The further you get from Amber, the closer you get to the chaos, and your surroundings change accordingly. In this series, the worlds outside of Amber are called the shadows, for it is like the shadow that Amber is casting, similar in shape but not real. In “The Splitting”, rooms without mirrors are called “shadow rooms”, not because they are shadows themselves, but because they are not affected by the mirrors’ influence, and are hidden from the eye of anyone who’s standing in the real world looking through a mirror.

This is about it for now. In my next post I will write about the early design process of “The Splitting: chapter 1”. Thank you for reading!