On this post I’m gonna talk about the early stages of The Splitting’s design. It’s gonna contain some spoilers for the 1st chapter, but not for later ones.

So, I knew I wanted to do something with mirrors, something “puzzely”. I had an image in my head of a screen split in half, showing two rooms – a regular room and its reflection – and the hero passing from one to the other through the mirror and moving objects around. This early design was very “puzzely”, and kinda reminded me of the game Sokoban with its top view and keyboard based mechanics. Later, as the game became less puzzle and more adventure, I decided it would be better if the screen showed only one room, but I kept the view and the controls the way they are. Now it reminded me more of To The Moon.

Sokoban and To The Moon

Now I had to define the relationship between the two worlds – how they will react to each other – which would also determine the game’s mechanics. The heart of the game, basically. At first I thought they could affect each other equally – when you move an object in one world, that movement will be copied in the other one. Then I thought it could be more interesting if the relationship wasn’t symmetrical. Maybe the real world could control the mirror world, but not the other way around. As the game progressed and the world and story became more dominant, It also became more important to me that the world will make sense as a whole, as a system with rules, so I decided the mechanics should come from there.

So I went back to the beginning and started with a simple situation – Let’s say, a person with a reflection lifts an apple in the real world, and meanwhile, in the mirror world, his reflection lifts the apple’s reflection as well. The reflection, being in some sort of hypnotic trance, copies the real person’s actions in perfect synchronisation. But, what happens in the mirror world when a person without a reflection lifts an apple? I wanted the world to feel natural and logical, so I went with the answer which felt most natural to me, which is that nothing would happen on the other side. The apple will stay where it is. In the first example the reflection was responsible for lifting the apple. In the second example there is no one to lift it.

The hero, being without a reflection, will have to use people with reflections throughout the game, if he wants some actions to have a symmetrical effect on both worlds. He will also have to use them without them knowing, because people with reflections don’t know about splittings and the mirror world. This creates an a-symmetrical relationship between the two worlds. You can only talk to people in the real world, because the reflections, being in their trance, can’t hear or see you. So you can affect the mirror world through the real world, but not the other way around.

The story began with a few random thoughts. What I already knew was that the hero’s reflection is gonna be missing from the beginning. There was no point delaying it. The reflection has to disappear so that the hero could pass through the mirror into the other world. Also, I wanted the game to start out with this mystery. The hero will have to find out the reason why the splitting happened, which would require him to both investigate the mirror world, learn about splittings in general, and to learn about the events in his life which led to his specific splitting.

Another thing I already knew was that I wanted the mirror-less rooms to be chaotic, like that closet no one ever opens so no one bothers cleaning it up. And then I thought – this could be a good place for someone to live in, especially if they don’t want to be found – And that’s how llehctiM was born. I thought it would be cool if there was someone hiding in the mirror house, who could also function as a guide for the hero as he learns the basic rules of this world. The idea of him being the twin of the criminal Mitchell came kind of naturally, since I needed a reason as for why he needed a place to hide in the first place, and I wanted to bring some version of the prisoner from my short story to the game. 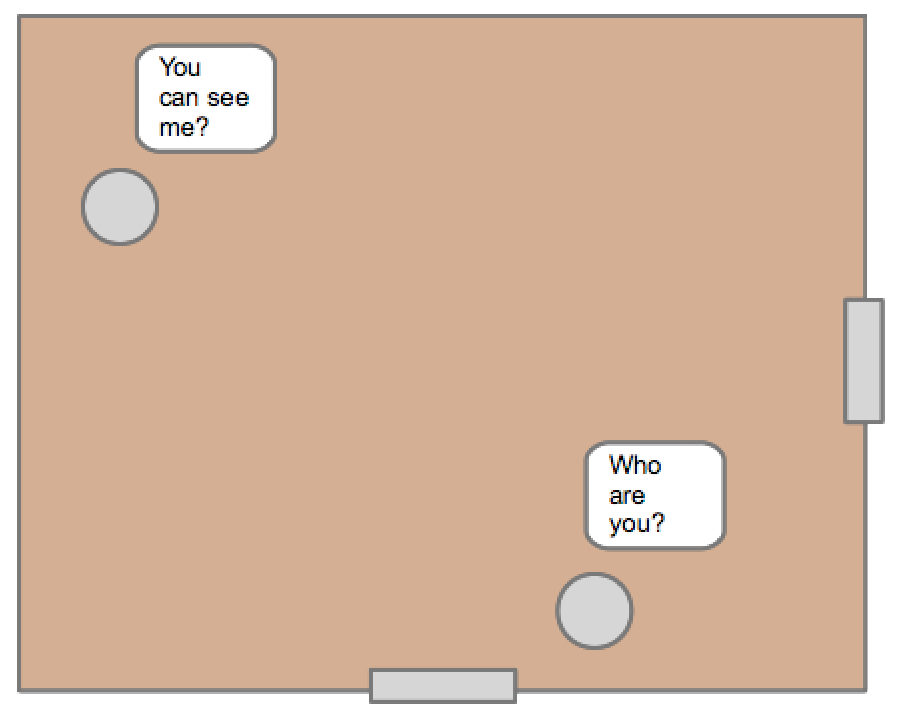 Now I’m gonna get a bit more technical and talk about some problems I encountered at the very early stages of the game’s design.

Quite early in the design process I discovered a problem – When the hero passes through a side mirror, he will enter a room which is flipped horizontally. But what about a front mirror? Will the mirror world be flipped vertically in this case? It would create 2 views for each world, as shown in the picture, an addition which require a lot of work, and worse – it could confuse the player. 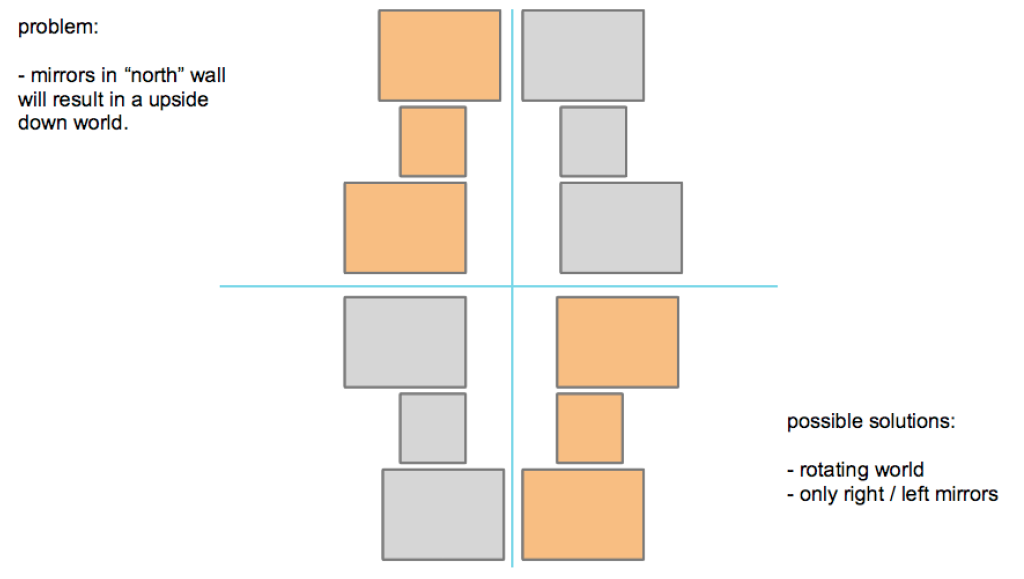 A sketch describing the problem with side and front mirrors

I was trying to decide weather to allow front mirrors or not. If I did allow them, I should consider letting the player rotate the world, in order to navigate between the different views. but then I reminded myself that I wanted to keep the game simple, so I chose to avoid front mirrors and only flip the world horizontally. It’s kinda funny, because a few months later, deeper into the development, I wanted to add a mirror, cause traveling to the bedroom every time in order to pass through the mirror just wasn’t working, so I added one in the living room. A front mirror. But when you go through it, the world flips horizontally, not vertically. I can’t say it bothers me that much, And I don’t think anyone else cares either.

Pokemon and To The Moon. No side walls.

I considered a few options, the main being a Clue-like graphic style, which gives the room perspective and shows a bit of the side walls. But I didn’t think that would look good with the pixel-art style, which doesn’t do to well with diagonals shapes. Plus, this view would show only the top of the hero’s head, and I wanted the player to see his hero’s face. 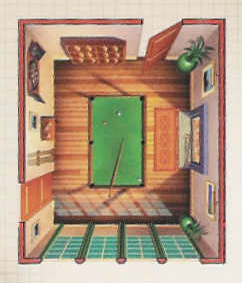 I was already thinking about cancelling side walls and side mirrors all together, but then I remembered that an early sketch I made of the apartment had mirrors on the walls. I went back to that sketch and I decided to try and make this work. It does twists the perspective a little, and some people have a problem with it. But still, most people don’t see anything wrong with it, so I believe this is the best choice.

Apartment sketch with side mirrors. The the final bedroom graphics, with the side wall and the side mirror.

This is it for now, thanks for reading!